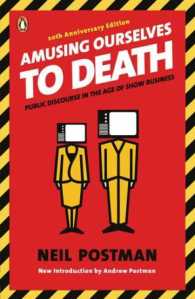 [T]ragedy is promoted on television as if it were entertainment: the trial of O.J. Simpson for a grisly murder, the car-crash death of Princess Diana, Chilean miners trapped below ground and yes, even the combination earthquake-tsunami-nuclear calamity in Japan. It is the nature of TV that everything is promoted the same way, no matter how ghastly the event.
There are rewards for doing so. According to FishbowlDC, “The Japan tragedy sets a new record for CNN.com with more than 60 million viewers watching.”

So writes Roger Simon of Politico.com. His complaint (posted March 17) echoes Amusing Ourselves to Death, Neil Postman’s 1985 classic critique of the “Age of Television,” which includes prescient passages like this:

There is no murder so brutal, no earthquake so devastating, no political blunder so costly — for that matter, no ball score so tantalizing or weather report so threatening — that it cannot be erased from our minds by a newscaster saying, “Now … this.” The newscaster means that you have thought long enough on the previous matter (approximately forty-five seconds, that you must not be morbidly preoccupied with it (let’s say, for ninety seconds), and that you must now give your attention to another fragment of news or a commercial.

That’s not precisely what’s going on now, in the age of 24/7 cable TV information, but Postman was on to something.

One thought on “Disaster … That’s entertainment”