Ray Giles had reason to be nervous. It was Ethiopia in the 1970s and he was an American missionary in a strained land.

With a few colleagues, he had traveled to a small town miles from his own home base to visit three Ethiopian evangelists who had been jailed on false accusations of branding converts. Local authorities were agitating the townspeople.

Ray and his companions stayed at a friend’s house, and a large, menacing crowd started gathering there. Missionaries had been attacked elsewhere, and people seemed primed for violence. The homeowner went out and offered himself to the mob. “Take me,” he pleaded. “Please don’t hurt my friends!”

“It got dark and things quieted down,” Ray recalled this week. “Nothing happened, but it could have easily erupted into violence. People went home after a while, and the next day we went about our business.”

Such calm commitment is fairly typical of Ray and Effie, his wife of 55 years. In 1968, they and their four young children left a church ministry in Greenville, N.C., for the Ethiopian highlands, after being gradually convinced by the Holy Spirit, they say, to join a team from Indianapolis-based Christian Missionary Fellowship. First with the Oromo people and later with the Gumuz people in the lowlands, they offered general education, basic medical care, Bible teaching and leadership for the new congregations.

“The time I most delighted in was a village meeting at night,” said Ray, now 74. “I’d often walk about 20 miles and go into a smoke-filed house to have a meeting of eight to 12 people. I’d do that on a regular basis, week by week.”

They moved to Africa during the turbulent post-colonial period, when dozens of nations on the continent were gaining independence and the Cold War was at its height. Unlike most African nations, Ethiopia avoided colonial rule almost completely, but resentment of the West could cross borders. Politicians and war lords exploited suspicions about Western domination. 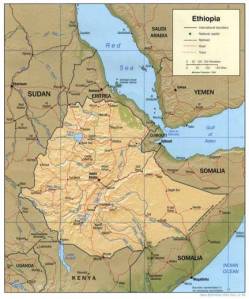 All the missionaries in Ethiopia were evacuated when the Marxists took power in 1977. The Gileses briefly assisted with relief efforts during a 1985 famine. They finally returned in 1992, a year after the regime was pushed out, and stayed seven more years. When they retired in 2000, they settled in Johnson City, where they had connections through Milligan College and Emmanuel School of Religion.

“Our experience in Africa gave us an appreciation for the many different ways of life and of understanding reality,” Ray said. “As a visitor, you see the poor people and think how unfortunate they are. But you see more laughter there than in the U.S.”

They were also impressed by the ingenuity of the people and their ability “to live within the environment without changing the environment.” Ray and Effie’s dedication to a simple life was a gift from Africa.

“People haven’t heard that being content with what you have is what you should pursue,” Ray said. “Family and friends are more important than things. Hospitality is important.”

He fondly recalled visits in homes, where drinking coffee – in the land where coffee was first cultivated – was a once- or twice-daily ritual that allowed time for long conversations.

“We have gained more than we have been given,” said Effie, 73. “We have been accepted by people even though we are so different, really in spite of our differences.”

Not that the Gileses idealize Ethiopia. Governmental corruption and a deep-seated culture of nepotism still cause problems, not to mention regular threats of drought, famine or regional conflicts.

But they look past those troubles. What motivated them, Effie said, was to see people transformed. In animistic societies, she explained, people will do almost anything to appease the spirits that control their lives, even sacrificing humans.

“It was exciting to see the change,” she said, “to see their freedom from fear.”

Their days are still full. There’s family: 11 grandchildren and 11 great-children (“with four more on the way,” Effie noted). There’s Lone Oak Christian Church, where Ray serves as an elder. They often teach in seminars and at colleges as guest lecturers. They are mentoring a new generation of missionaries, including some of their own children and grandchildren.

And as of July, there has been Ray’s cancer.

So that typically calm commitment, which has served them so well before, is being tested in a new way. That’s the story for next week.