Israel was a nation full of heroes.

That’s what I concluded as a teenager when I nurtured a fascination with the new nation of Israel. The nation seemed to be a modern miracle brought into existence by faith, ingenuity and courage.

A lot of history has passed since then. May 15 was the anniversary of the nation’s founding in 1948, when Britain ended its post-World War I “mandate” as Middle East caretaker, in theory leaving Arabs and Israelis to sort out their own problems. It hasn’t worked very well.

My interest in Israel sprang partly from family: my father was Jewish. But long after my parents divorced and I had converted to Christianity, I clung to a thin claim to Judaism. As the Yom Kippur War raged in 1973, my brother and I even discussed the merits of fighting for Israel, should the war last several more years. (Our Israel-loving pastor assured me that we could be good Christians if we fought for love of Israel, but not if we hated Arabs.)

My early adolescent eyes saw an idealized story, enhanced by biblical quotations: A long struggle to gain a Jewish homeland, historically justified after the Holocaust. A bold underdog fighting for survival against the surrounding Arab foes. A new community carved from a sliver of land, finding a noble form in the kibbutz. The new Israel was transforming Palestine from a chaotic, barren desert into a fertile, blossoming society.

This straightforward reading was inspiring to a sort-of-Jewish boy whose own country was militarily and morally bogged down in Vietnam.

Winners get to write history

But as the cliché says, the winners get to write the history, and my lopsided view of Israel omitted the plight of the Palestinians. I was reminded of this a couple of weeks ago, during a conversation with Hanna Massad, pastor of Gaza Baptist Church. (See last week’s column.)

Massad’s parents were Palestinian, living in Jaffa in 1948. Overnight they became refugees, forced from their homes along with 700,000 other Gazans, including more than 50,000 Christians. Many of their ancestors had lived in the same places a thousand years earlier. Masses of displaced people scattered around the region, landing in camps in Syria, Jordan, the West Bank or beyond.

All this was part of a maze of political dealing and double dealing that started as the old Ottoman Empire, which had controlled the region for centuries, was defeated by the Allies during World War I.

During the next 30 years, declarations and agreements among European powers, Arab leaders and Zionist organizations – Jewish groups committed to establishing a national homeland in Palestine – tried to balance their various interests. Religion, ethnicity, economics and property claims only complicated matters, as both Jews and Muslims cited Scripture and history.

The British, given control of the region in 1922, sometimes favored Arab interests, sometimes Zionist. Zionists and Arabs occasionally appealed to their common heritage and tried to cooperate and make room for each other. But those times grew less frequent as time passed, as frustrations grew and as sometimes deadly violence flared among both Palestinians and Zionists, usually in reaction to changes in British policy.

By 1947, when the British government referred the matter to the newly formed United Nations, reconciliation seemed impossible. The UN finally recommended forming two states, Arab and Israeli, with Jerusalem designated as an international city.

After the British left on May 14, 1948 – a day earlier than scheduled, which caused chaos – the tensions erupted into war. But Israel secured its foothold and took over most of Palestine. The 61 years since have spiraled into bigotry, terror and vengeance, occasionally punctuated by hopeful attempts at peace.

No one is clean

My first inclination still is to sympathize with Israel. Given the history of the Jews – repeatedly driven from place to place over three thousand years – it’s easy to understand their sense of insecurity even as they established a modern homeland.

But if I take a step back, I can begin to see more of the Palestinian complaints, how their own claims to law, history and religion were set aside 61 years ago. I can see past the stereotypes and meet real people in this story, such as Hanna Massad and his family.

I can see that my adolescent view, with its easy heroism and uncomplicated morality, isn’t adequate. I can see, as the Scripture says, that no one is clean. No, not one. 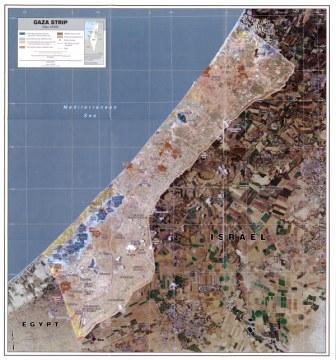 Here’s one measure of just how heated the subject of Israel and Palestine can be. When the Christianity Today Web site reported in January that the Palestinian Bible Society, located in Gaza City, may have been hit by an Israeli missile during the brief but intense winter war, some readers were anything but sensitive.

“And my response is … so what?” wrote one. “Lots of buildings have been hit. Is this an attempt to move Christian sympathy for Hamas?”

“If I choose to live among the enemies of freedom,” added another, “I shouldn’t be surprised that I might be destroyed when the friends of freedom respond to threats.”

One reader took offense at this remark, calling it “sickening” because it ignored the fact that Palestinian Christians were living in their own homes. No one said “amen.” When another commenter criticized Israel, however, others piled on.

“Your what happens when dumb liberals think they understand Christanity,” one grammar-challenged reader replied.

No matter what someone thinks about the Israel-Palestine morass, this wasn’t a high-water mark for Christian solidarity.

Hanna Massad was not part of that discussion – it’s doubtful he’d want to be – but he knows Gaza better than any of those readers. Gaza is his home.

Massad is the pastor of Gaza Baptist Church, the region’s only evangelical congregation. His wife managed the Palestinian Bible Society – that is, until they, their two young daughters and several extended family members left Gaza for the West Bank in 2007.

They departed literally to save their lives, thinking they would be gone for a matter of weeks instead of almost two years.

The Bible Society building was firebombed at least twice, a repeated target of Palestinian extremists. The worst moment came in October 2007, when a close friend and colleague, 29-year-old Rami Ayyad, who managed the Bible Society bookstore, was kidnapped in broad daylight and later shot to death. Gazan authorities condemned the murder and promised an investigation, but without results.

Massad and his family came to the U.S. last August for a one-year sabbatical, so he could study at the Overseas Ministries Study Center in Connecticut. He visited East Tennessee last week, speaking at Milligan College and Emmanuel School of Religion.

Massad, who received a Ph.D. in theology from Fuller Theological Seminary in California, chooses his words carefully as he describes life for Palestinian Christians. His voice is sad, not angry.

“We are caught between two fires,” Massad said last week during a lull in his speaking schedule. “On one hand there’s the fire of the Israel occupation. Then there’s the fire of militant Muslims, who are not happy with us.” Massad, 49, is a master of understatement.

Since the Hamas party gained control of Gaza in the 2006 elections, the already stressed Christian community has become a more frequent target of Muslim extremists. Hamas officials condemn attacks but take no effective action. The entire Christian population of Gaza has dwindled to about 2,000 believers, living among a population of 1.5 million.

For its part, Israel doesn’t seem interested in a real solution, Massad said. The infamous 432-mile security wall, severe travel restrictions (which separated Massad and his wife for almost a year), the continuing construction of settlements – all stir up Palestinian resentments. Last winter’s conflict cost 13 Israeli lives, compared to 1,300 Palestinians, most of them civilians.

Against that backdrop, Massad stands in an awkward and dangerous place. As a Palestinian, he is suspect to the Israelis. As a pastor, he makes himself a target for Palestinian extremists who hate Christians and think he may be aligned with the U.S. because the word “Baptist” is on the church building and he won’t call Israel his enemy.

“Humanly speaking, it’s easy to be depressed,” he said. “There are militants on both sides. But you cannot live without hope. With good intentions, all things are possible.”

When Massad and his family return to Gaza this summer, he anticipates “a lot of rebuilding of souls” in the congregation and community. They plan to restart the library and school, and to open a health clinic. The role of the church, he said, is to help create a culture of peace.

“We’ll do work to reflect God’s love,” he explained. “We can continue to have love for Israel and for the Palestinians. Love for one should not make you hate the other.”